Former NBA star Gilbert Arenas is paying it forward after he won $300,000 in the lottery after a “blessed” encounter with a homeless man last week.

In a lengthy Instagram post, Arenas said that late on May 12, he wanted to get his regular lottery ticket at his local gas station where a homeless man asked him for change.

This is what he wrote:

“This caption is not about good deed but about a struggling man’s sacrifice and belief. May 12th I rushed out the house to play my lotto numbers forgot my money and the car was on E.

I had a whole $10 in the car. I pulled up to the gas station to get $10 worth so I can head to (my hook up gas station) and then a struggling man says ‘hey sir can u spare me some change?’

My first thought was I don’t have time for this sh*t today. So I said ‘man I have $10 for some gas and that’s it, I have 8 mins to get to the other gas station to play my numbers before it’s to late’. He says ‘you can play here’…I said ‘the other gas station lets me push the buttons myself’. He then says ‘how far u going!’

My brain is saying (the f**k u asking all the questions for) so I was only going to CALABASAS which was 7 mins away but lied and said Thousand Oaks which was at least 16 mins away so before he did the math on everything I said ‘8 mins before the cut off but it’s 16 mins away’.

By the time I got to the my hookup gas station they were closed I guess they closed early for repair so I didn’t get to play my numbers (angry emoji).

I wake up to a text Wednesday morning saying congratulations you won 300k. I’ve heard this scammer type sh*t happening so I ignored the text because I didn’t get to play my numbers so I couldn’t have won sh*t.

I went to the gas station later that day to play powerball that was later that night and the owner runs out saying ‘YOU WON I texted you’. I said ‘huh I didn’t play yesterday’. He said ‘I played your numbers for you because I was closing early and you WON’.” 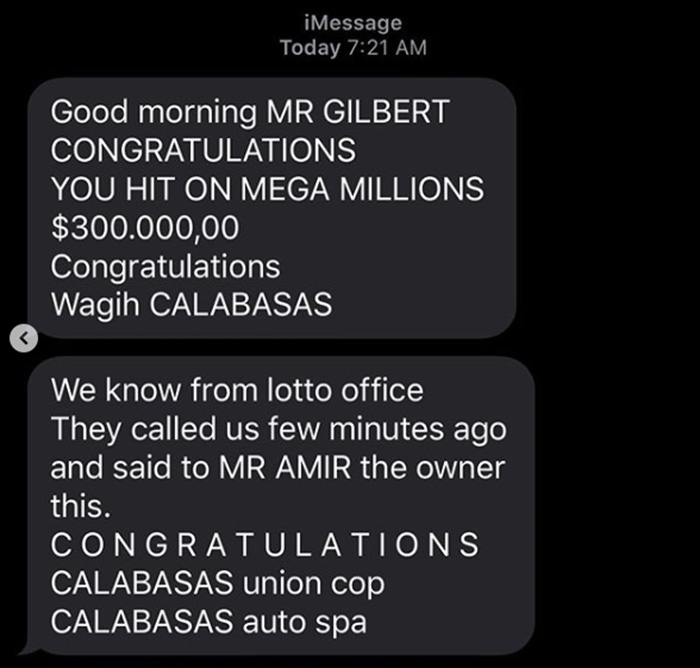 “Long story short…..I pulled up on my guy yesterday and gave him his cut (for his safety) won’t say the number. He jumped up and hugged me for 5 mins crying and then started to pray.

I’ve given back to the homeless BUT never was blessed by one. His good-hearted gesture of me making it back home blessed that ticket.”

AllHappyNews is free for users. If you’d like to support our cause of spreading good, please consider a small donation to aid in website costs by visiting here: DONATE

Deals of the Day

Your funds are used to keep the site running. Thanks for your donation!